This work is recently accepted in Physics Reports. — We consider quantum state estimation for dynamical systems, where observations come from both before (past) and after (future) the estimation time. Past-future information has been used in various ways in the literature: quantum state smoothing, most-likely path, and two-state vector and related formalisms. We propose a unifying framework based on state estimation with expected cost minimization. We connect all three existing approaches by defining new cost functions and estimators, bridging the gaps between the three. We also consider an example of a driven two-level system dissipatively coupled to bosonic baths, showing all seven state estimators for the unknown qubit state. 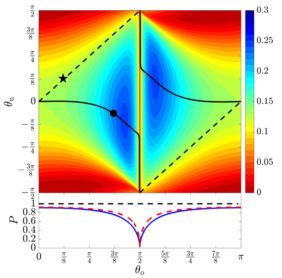 Quantum state smoothing is a technique for assigning a valid quantum state to a partially observed dynamical system, using measurement records both prior and posterior to an estimation time. We show that the technique is greatly simplified for linear Gaussian quantum systems, which have wide physical applicability. We derive a closed-form solution for the quantum smoothed state, which is more pure than the standard filtered state, while still being described by a physical quantum state, unlike other proposed quantum smoothing techniques. We apply the theory to an on-threshold optical parametric oscillator, exploring optimal conditions for purity recovery by smoothing. The role of quantum efficiency is elucidated, in both low and high efficiency limits.

Quantum Trajectories and Their Statistics for Remotely Entangled Quantum Bits

Of all of the predictions of quantum measurement theory, the ability to entangle by measurement is surely one of the most dramatic and exciting. This process can be thought of as dynamical and random given the continuous measurement of photons interacting with multiple spatially separated quantum systems. Many questions about the entanglement creation process are outstanding, such as the following:

(i) What is the complete characterization of the dynamics of entanglement creation as a continuous trajectory?

(ii) What is the statistical distribution of the entanglement at any time during the process?

(iii) What is the most-likely way entanglement is created? Here, we provide systematic answers to these questions and others by analyzing experimentally entangled quantum trajectories of jointly measured superconducting quantum circuits.

We track the quantum trajectories of two transmon qubits housed in separate superconducting cavities designed to minimize signal loss. We observe how the qubits evolve under joint continuous measurement by microwave frequency radiation, demonstrating a comprehensive understanding of dynamical entanglement generation by the measurement process. This entanglement generation is stochastic, and we present a detailed theoretical analysis of the statistics of the process, finding the full statistical distribution of created entanglement at any point during the process, as well as the most-likely paths in the quantum-state space to reach entangled states, and the associated times. In particular, we show that the two-qubit state collapses to one of three subspaces, and we determine the experimentally most-likely paths. We show excellent agreement between experimental data and our theory.

Our results present new ways to use joint measurement as a control mechanism to entangle remote systems for quantum information processing purposes. 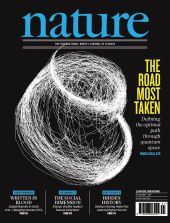 A central feature of quantum mechanics is that a measurement result is intrinsically probabilistic. Consequently, continuously monitoring a quantum system will randomly perturb its natural unitary evolution. The ability to control a quantum system in the presence of these fluctuations is of increasing importance in quantum information processing and finds application in fields ranging from nuclear magnetic resonance1 to chemical synthesis. A detailed understanding of this stochastic evolution is essential for the development of optimized control methods. Here we reconstruct the individual quantum trajectories of a superconducting circuit that evolves under the competing influences of continuous weak measurement and Rabi drive. By tracking individual trajectories that evolve between any chosen initial and final states, we can deduce the most probable path through quantum state space. These pre- and post-selected quantum trajectories also reveal the optimal detector signal in the form of a smooth, time-continuous function that connects the desired boundary conditions. Our investigation reveals the rich interplay between measurement dynamics, typically associated with wavefunction collapse, and unitary evolution of the quantum state as described by the Schrödinger equation. These results and the underlying theory, based on a principle of least action, reveal the optimal route from initial to final states, and may inform new quantum control methods for state steering and information processing.